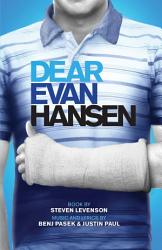 ✏Dear Evan Hansen TCG Edition Book Summary : Winner of the 2017 Tony Award for Best Musical “Dear Evan Hansen lodges in your head long after you’ve seen it or heard it or read it. It feels like a pure expression from young writers at a crossroad of coming to terms with who they are and what they want to say about the world. Its honesty and truths haunt and ultimately open us up to ask the same question, no matter what our age or crossroad: What are the lies we tell ourselves?” –James Lapine (from the Foreword) “A gorgeous new musical. Rarely—scratch that—never have I heard so many stifled sobs and sniffles in the theater. For those allergic to synthetic sentiment, rest assured that the show, with a haunting score by Benj Pasek and Justin Paul, matched by a book of equal sensitivity by Steven Levenson, doesn’t sledgehammer home its affecting story. On the contrary, the musical finds endless nuances in the relationships among its characters, and makes room for some leavening humor too. The musical is ideal for families looking for something more complex than the usual sugary diversions. But then it should also appeal to just about anyone who has ever felt, at some point in life, that he or she was trapped “on the outside looking in,” as one lyric has it. Which is just about everybody with a beating heart.” –Charles Isherwood, New York Times “Ravishingly bittersweet... A marvelous score by Benj Pasek and Justin Paul, and an equally accomplished book by Steven Levenson...Dear Evan Hansen rolls onto some highly sensitive terrain—the writers are taking a serious look here at the ways in which we a s a culture exploit others’ misfortunes, a phenomenon abetted by the high-speed interventions of social media. The delight here is that Pasek, Paul, and Levenson do understand how to make this seemingly unmusical idea sing, and sing grandly.” –Peter Marks, Washington Post “So fine in its craft and rich in its themes that, like the best works of any genre, it rewards being seen again—and again.” –Jesse Green, New York Magazine “Terrific, gripping, and heartfelt. With a gorgeously melodic score by Benj Pasek and Justin Paul, and a smart and soulful book by the playwright Steven Levenson, Dear Evan Hansen feels like a theatrical beachhead planted by (and, partly, for) millennials.” –Adam Green, Vogue “Dear Evan Hansen is smartly crafted, emotionally open-hearted, and ideally cast. It has been embraced by millennials—yet its appeal is universal. Whatever your age, you’ll watch Dear Evan Hansen with the shock of recognition, and be touched by the honesty with which it portrays the smothering sensation of being an adolescent misfit, an awkward loser trapped in an indifferent world of self-assured winners.” –Terry Teachout, Wall Street Journal A letter that was never meant to be seen, a lie that was never meant to be told, a life he never dreamed could be his. Evan Hansen is about to get the one thing he’s always wanted: a chance to belong. Deeply personal and profoundly universal, Dear Evan Hansen is a groundbreaking American musical about truth, fiction, and the price we’re willing to pay for the possibility to connect. *This publication includes the book and lyrics to the musical, as well as a foreword by James Lapine. Please note that it does not include the musical score.* Steven Levenson is the book writer for Dear Evan Hansen. His plays include If I Forget, The Unavoidable Disappearance of Tom Durnin, Core Values, The Language of Trees, and Seven Minutes in Heaven. A graduate of Brown University, he served for three seasons as a writer and producer on Showtime’s Master of Sex. Benj Pasek & Justin Paul are the song-writing team behind Dear Evan Hansen. Previous musicals include A Christmas Story: The Musical, Dogfight, James and the Giant Peach, and Edges. Their film projects include La La Land (for which they won the Academy Award for Best Original Song for “City of Stars,” with composer Justin Hurwitz), Trolls, Snow White, and The Greatest Showman. Their television credits include The Flash, Smash, and Johnny and the Sprites. Both are graduates of the University of Michigan Musical Theatre Program and members of the Dramatists Guild of America, Inc.